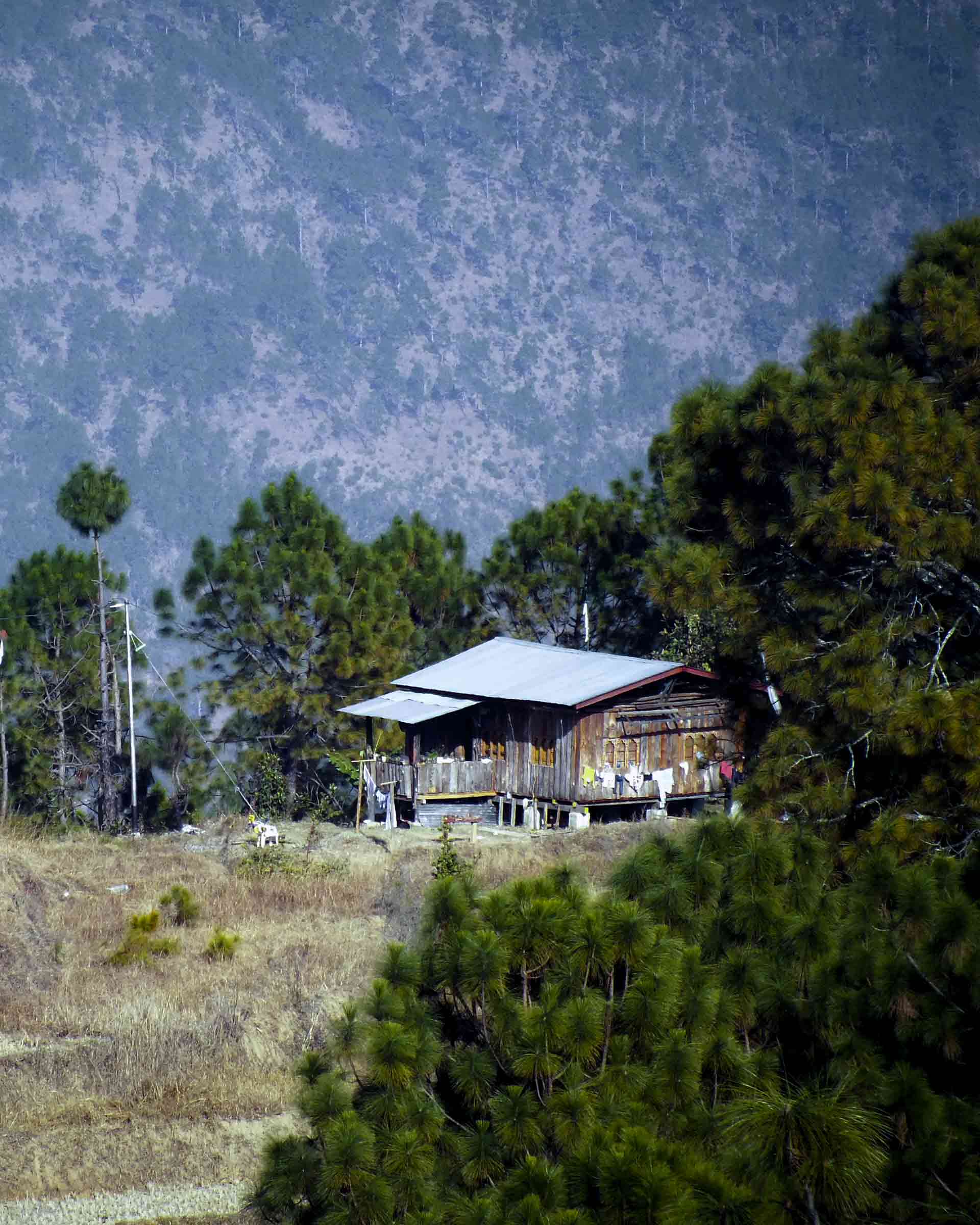 It was a lazy Monday morning when I woke up to my alarm and found my mother inside the alter room chanting her prayers and my father preparing the butter lamp. It was not a normal Monday morning routine, ignoring the oddness I went on to prepare myself a cup of coffee only to find out that we were out of milk. Being the absent minded I was, I had forgotten to buy milk the previous evening. So I had to rush towards my car and drive off to the nearest shop. This was when I meet my old friend who was going on a trip to DODEYDRAK. A place located high in the mountains. It is half hour drive and a long tiresome walk through the forest. Knowing the person that I am he asked me if I had any plan for the day as it was Lord Buddha’s parnirvana, a day when Lord Buddha conquered over the evil and was enlightened. It is one of the most auspicious day in Bhutanese lunar calendar. Knowing that I might have no plan he invited me to accompany him in his excursion. I willing agreed to it and drove back as fast as I could. I packed my camera and drove off to the place where he told me he would be waiting with his friends.

As I drove my car towards the meeting point, I could see my friends with four beautiful ladies and two monks waiting for me. After brief introduction we drove together and reached a point from where we had to start walking. The monk as it turned out became my guide and the four ladies my travel companion. We would often crack a funny joke and laugh out our fatigue. The monk would from time to time tell us stories about, how Dodeydrak came into existence. As I was photographing the amazing scenes in front of me, he curiously looked at me and suggested me to take one from his angle. As I showed him the photograph to check if he was satisfied, he told me something amazing. He ran his finger over the photograph that I had taken and said that the scene looks more like the Raven Crown.

We were both awed and amazed. His insight to the place we were traveling to surprise us from time to time. At one point I wondered had he not been a monk, what would he have become.  We took few more photographs and continued our journey. At times we would fall silent and listen to the chirpings of the birds. We would listen to the sound of water flowing along with the gushing wind through the trees. Often we would find ourselves laughing at each other but every time we gave in to nature we felt a sense of freedom and peacefulness. The stillness of the moment brought tranquility within our souls.

It is often in these moments of peacefulness that we see our troubles evolving forward. I was lashed back to my life’s emotional crisis. In that moment of peace I questioned myself of what life I had to go back to, all the troubles that would be waiting for me. Sensing the trouble in me, the monk turned guide now turned into a counselor. Being the vulnerable me at that point I told him my life’s crisis and how I went through emotional trauma. He would listen to me quietly and express his condolence. After that he told me stories after stories. Stories of how some peoples have faced a bigger crisis then that of mine, he told me stories of how the path that we were traveling was built by the monks living in the monastery, Monks who were as young as 12. Every word that he uttered had a deep impact. It did not make the pain go away but knowing someone else is having a harder time than me, gave my spirit a boost to fight back.

As we journeyed through the forest, we reached the top of the mountain and to my astonishment we saw a football ground. Sensing us astonished, he would go on saying that this was built by a bunch of monks with pickaxe and shovel.  Standing in front of the magnificent feat that they have achieved, he could not help but proudly boost as being one of the youngest members to have worked on it. This ground was built when he joined the monastic body at a very young age. At that point of time I had nothing but respect for that man in robe. Watching him smile despite the troubles he had in his life feed us with more energy. But after the talk of football started, it was all about Messi Vs Cristiano Ronaldo.  Anyone could guesshow much they loved football seeing a ground constructed on top of the mountain using pickaxe and shovels.  The monk told me that, often they would organize tournament within themselves and keep on playing as a means of giving body physical exercise. Some of the jinda (Philanthropist) would sponsor the prize money and the trophy.

Before we could move on he wanted us to meditate over the top of the mountain. It was remarkable to see him get lost in the cosmic world of meditation. His face reflected peacefulness and radiated happiness. After the short meditation we continued our journey towards the monastery. On the way we were greeted with sweet messages written on the plank of wood. And reading these messages at this height made more sense than it would have, had I been reading this in my cozy room. The majestic view as we climbed up the view point was breathtaking. Mountains shrouded in the clouds and prayers echoing in the foot hills. Amidst the peacefulness, one would imagine what it might have taken to built such a wonderful monastery up in the clouds. The transportation of materials for the construction would have taken massive man power, as if my monk friend had heard my thoughts he told me that most of the materials were sourced out from the forest nearby. Stones, boulder and sands were found within the vicinity of the monastery making it much easier comparatively.

As you stepped inside the monastery, we were welcomed by monks serving hot butter tea. It was one of the most satisfying teas that I had ever tasted. I wondered if it was because of the long journey that I had taken or was it the blessed terrain that made it taste better. While enjoying the tea, our monk friend explained about the miniature model in front of us depicting the value of GNH. Soon after the tea we were rushed inside the guest house for lunch. It was a well decorated place with pictures of royal family and masters hanging on the wall. We were given the special treatment because our monk friend turned guide turned counselor, turned out to be one of the senior monks at the monastery who was well respected. He would then after a hearty meal, take us around the place explaining the significance the place. The stories about Dodeydrak would take yet another write up, but this one is about the spiritual journey and contemplation that I had.

Going around the temples, knowing the meaning of life through meditation, it was what anyone would want. Like every journey we too had to end it and the departing was the most painful thing. As we started our journey back, we bit farewell to the monks in the monastery. Our monk friend who turned out to be the senior monk gave us his blessing. We quietly walked back, speaking less and losing ourselves in retrospect of the journey. It was when I reached back to my car that I remembered forgetting to buy the milk. Life as mundane as it is sometimes gives us blessing in disguise. As I bought the milk I promised myself to make a second trip within a year so that I can relive the peacefulness.

Category : Uncategorized
Previous6 Things that you should know before planning your visit to Bhutan.